i ordered a block of 5 static ipv4 from Comcast.  Of course they require us to use their modem/gateway device.  AND it’s also a technicolor(known in the industry as technicrap).  I almost rejected the install right there..and looking back, i should have.  The issue i have been having is ipv6 routing from my network to the internet is failing.  I have been blowing up Unfi(Ubiquiti) on this issue because 99.999 percent of the time when i run into weird issues it’s a bug in the Unifi software.  Imagine my surprise when i finally was able to log into the technicolor and i noticed the following: 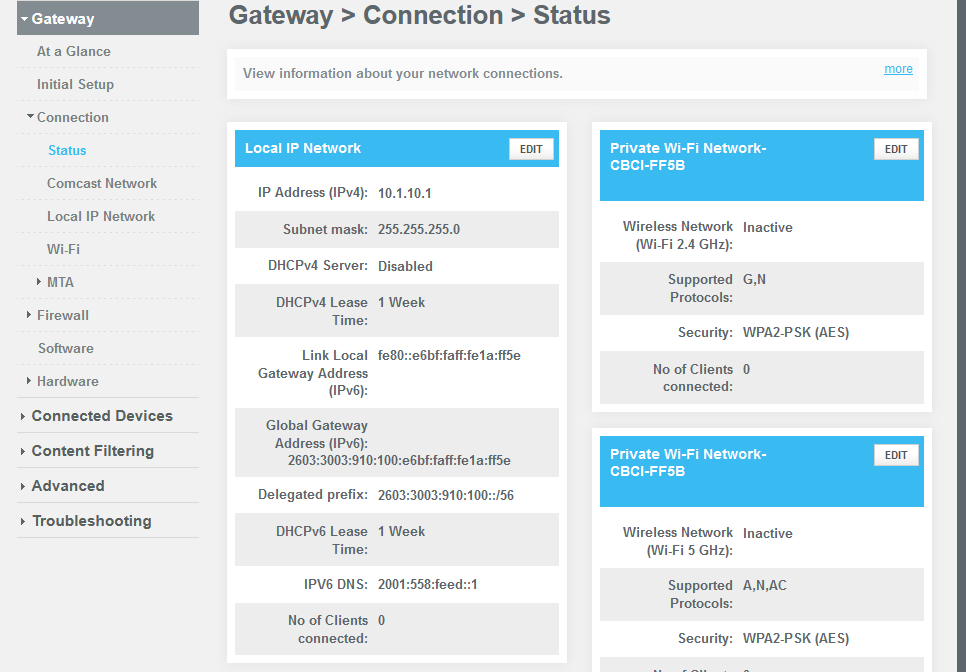 What does this screen mean?  What it is saying..in the ipv6 section is that the modem is trying to act as the router for the ipv6 delegation given by Comcast.  It also means all ipv6 traffic both way stops at the Comcast device.  ipv6 traffic coming in never makes it to my firewall and ipv6 traffic from my network never makes it out of the network.  This explains why I cannot get ipv6 address into my network and why my devices have all been unstable since i installed my static ip addresses.  It turns out this is a known issue..the installer told me it was a bug..

That’s just for starters. It goes on many many many more times from there.

Comcast is more than large enough to pressure Technicolor to design and push out a firmware that acts correctly in what is a common scenario…they just do not want to.  I have told Comcast they will give me a non-technicolor modem or i will cancel the statics as it’s now been 3 weeks since install.  Comcast is sending a tech out tomorrow..if he brings a Technicolor, I’m cancelling the statics and going back to regular business class with my own modem.  I will add additional posts either with the issue fixed or the issue worked around by going back to dynamic business class service.